Imagine finding the original house deed of your Victorian home, or perhaps love letters from over 100 years ago. It’s possible you’ve been walking by them on a daily basis.

Newel posts, or the large post ending a staircase, are structurally meant to keep the rest of a staircase safely anchored, but sometimes they keep secrets as well.

In the last half of the 19th century, machinery had advanced to make the popular “new style” of broad posts on a lathe, often leaving an empty space in the middle. It’s the hollow posts that have lent themselves to the folklore of secret hiding places.

Before the cap of a hollow newel post was attached (or removed later), some owners rolled up their house deeds, original plans or other mementos and placed them in the void before it was closed. The item most often found is a coin, placed inside for good luck.

The lady of the house was, of course, aware of this hidden space as it was most likely one of the few places not easily accessible by her servants, children or spouse on a daily basis. There are many family stories of love letters from previous relationships or loved ones off at war, or documents that might reveal some tawdry detail from the owners past being found years later in a newel post.

Though most of these stories are probably the stuff of family legends, enough have been true to keep the intrigue alive.

Another feature of a newel post cap sharp eyes might spy is a small round “button”  carved of ivory, whale bone or mother of pearl sometimes inlaid in the newel cap. These are called mortgage buttons or amity buttons, and signified their was no lien on the property – a point of pride for the homeowners. Not as mysterious perhaps, but interesting nonetheless.

So the next time you tour a grand home with a large newel post anchoring the staircase, ask your guide if anyone has peeked inside. There might be a story there.

“Jumped headlong from a window of the Confederate Home…”

The line made me gasp out loud.

To back up a little, I was in search for background information about Christian Henry Thieme before a recent trip to Austin to locate his grave. 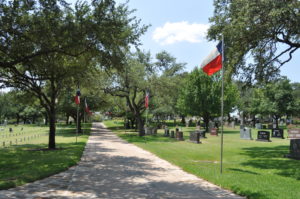 The Galvestonian was born in Germany in 1827, immigrated to Texas in 1860 and was a member of th e Catholic church He enlisted in the Confederate Army at age 34, once telling an interviewer that he had been “a private in Company B, in Cook’s heavy artillery. My first captain was Coura, and first major was Cook.”

I knew that he and his wife Elizabeth had a family of three daughters, and they all had survived the 1900 Storm. Yet at some point, Christian ended up in the Confederate Men’s Home (for disabled veterans) in Austin.

During the 1900 Storm, Christian and Elizabeth lived with their daughter Selma Nelson and her family at 710 Church Street. Although they didn’t lose any family members in the tragedy, they were sure to have witnessed grievous sights.

The traumatic events caused him to become mentally unbalanced, forcing his family to send him to the home in Austin the following April.

Suffering from rheumatism and old wounds far from home, he was dealt an additional blow when his wife died in November. She is buried in Galveston’s Oleander Cemetery, but her marker has been lost to time.

I thought I may have found all available information about him, and then came the discovery of a newspaper account of his death on June 23, 1910.

“Christian Thieme, an aged Confederate soldier, killed himself today by jumping headlong from a window of the Confederate Home. Thieme became mentally unbalanced at the time of the Galveston storm. Melancholia caused him to talk constantly of killing himself. Formerly an express man at Galveston, he lost all his property in the tidal wave and was force to come to the Confederate Home. None of his relatives can be located.”

Stunning. And infuriating…because his family still lived in Galveston and couldn’t have been too difficult to locate.

So I went to visit him and find his marker.

It stands in a sea of military markers in Confederate Field at the Texas State Cemetery, with his last name misspelled as “Thiemer.” Gleaming white as if wanting someone to remember his story.

And now he has had at least one visitor from home. 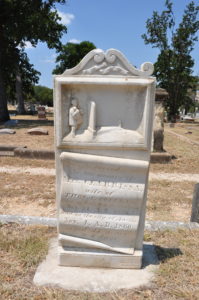 Many gravestones don’t begin to tell the story of a life or death, just listing the barest of facts. But every so often I see one that illustrates a chapter of the life (or end of life in this case) that ensures the marker was created just for this specific individual. These are the type I wish every grave had, to help us appreciate the person memorialized.

This spectacular carving portrays a father holding a young child in his arms and standing at his wife’s gravesite. I’ve never seen one like it in person.

Even with over 150 years of weathering, the details are astounding. He holds a top hat in his left hand and his child in his right. The drapes of the child’s dressing gown hang down behind it’s father’s arm. Facial features of the man are still somewhat discernible, and his wife’s grave is marked with a headstone and footstone. One knows immediately that he has been left alone to care for their small child. 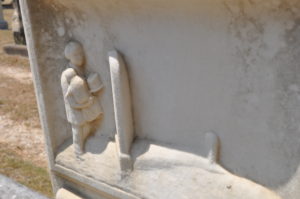 They were blessed with a daughter, who they named Clarissa Ann (“Annie”), in July 1860 but just four months later Clarissa passed away.

On Halloween 1864 Adelaide “Addie” Swisher, Clarissa’s sister who had married James Monroe Swisher at her sister’s home in 1857, died as well presumably from postpartum complications. Her name is listed on Tom’s gravestone, along with the name “Little Lillie,” their three year old daughter who died the same year.

The following year Tom enlisted in the military and was stationed in Austin.

Their young child, who is referred to in documentation alternately as Annie or Clara, ended up being raised by her aunt Ann Marie Wells in Brooklyn far from where her parents were laid to rest. She lived the rest of her life on the east coast, and I wonder if she ever came to visit their graves and stood before this stone. It’s doubtful.

So much sadness in such a short time.

But Tom’s love, and grief, is immortalized here in marble and encourages those who pass by to learn their story.

I came to Oakwood specifically to look for this marker, and made an additional discovery that made my day.

As I was photographing it, I looked at the bottom right

corner and found the signature of the carver… Allen & Company Marbleworks of Galveston. Especially thrilling, since Allen owned the state’s first marbleworks, founded in Galveston in 1852 on Center Street between Strand and Mechanic. His business has now been owned by the Ott family for five generations.

The gravestone had traveled a long way to come here.

I love a good connection to Galveston history, and somehow seem to find them wherever I go.