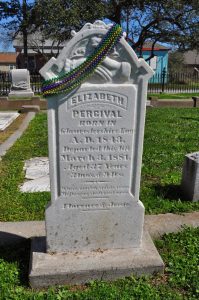 Having escaped from an abusive marriage to an alcoholic husband, Elizabeth Percival started a new life with her two step-daughters Florence and Jessie. She opened a restaurant named The English Kitchen, serving the English dishes from her childhood with a boarding house on the floors above it. In the following months she and the girls gained a loyal following of customers and friends.

In March of 1881, Elizabeth and her daughters invited their friends to join them at their restaurant, which was right on Galveston’s Mardi Gras parade route, for a night of fun and fellowship.

They had no way of knowing the night of revelry would end in tragedy. 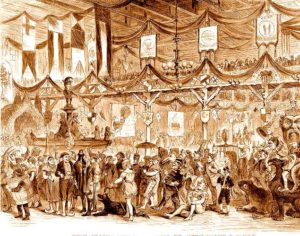 Elizabeth’s ex-husband hid among the floats and marchers in the parade. As he passed the restaurant, he took aim and shot Elizabeth in front of all who loved her. Her step-daughters, who she had rescued from their natural father, were grief-stricken, and erected a beautiful marker over her grave.

I stopped by Trinity Episcopal Cemetery to leave beads for Elizabeth. While the island of Galveston is in the middle of Mardi Gras season, I didn’t want her to be forgotten.

I hope you’ll enjoy more of Elizabeth’s story, along with other amazing stories behind the gravestones of Galveston in my book, “Galveston’s Broadway Cemeteries,” from Arcadia Publishing. Available on Amazon.com.