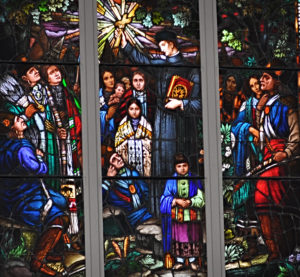 When you’re a history buff, visiting historical sites is just part of any well-rounded getaway!

My sister and I just got back from a trip to Oklahoma, where we spent part of every one of our childhood summers. My grandparents’ farm was built on my grandfather’s Indian land grant (he was a Cherokee, born in 1899…but I’ll share more about him later).

On our way to find the farm again, w 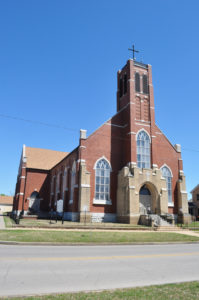 e decided to go to Pawhuska to visit the Pioneer Woman Mercantile and the ranch where Ree Drummond films her Food Network show.

In addition to that, I had heard of an amazing Catholic church in town built by the Osage Indians. The stunning stained glass windows are the feature that draws most visitors to this historic church.

Before we left on our trip, I called the Immaculate Conception Catholic Church, and confirmed that we would be able to take a tour on the day we planned to be in town. The lovely lady who answered the phone assured me that she would be there. If you plan to go, you can also check the 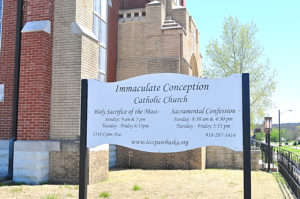 Pulling into the parking lot, there is nothing particularly grand about the exterior appearance of the structure, but the moment we stepped inside it took our breath away.

The 22 windows in the sanctuary are considered to be among the most unusual stained glass of any church in the United States. Traditional Catholic windows feature biblical scenes, and twenty of those found in this church do as well.

The other two, however, depict images of people who were alive at the time the church was erected – which is strictly against Catholic guidelines. The Pope gave special dispensation for these to be created as an acknowledgement of the special relationship between the Osage and the Catholic missionaries.

But I’m getting ahead of myself. First I’d like to share just a bit about the history of the church itself, which is as interesting as its details.

The church is known in the Pawhuska area as the Cathedral of the Osage.

Knowing that the O 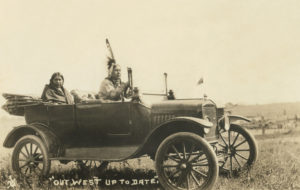 sage in the area may have been the richest people per capita in the world at the time may come as a surprise to many, but definitely explains the exquisite cathedral and its rich details.

In the beginning of the 20th century when oil was struck on Osage land, the tribe suddenly went from one of the poorest tribes to the richest.

The men are said to have driven the finest cars and simply replaced them if they broke down or got a flat tire. The women of the tribe walked the streets of town with diamonds on their shoes.

Their parish priest at the time was Father Edward Van Waesberghe, who laid out plans and designs for the church around 1910. The priest even did much of the brickwork himself, aided by Osage members. 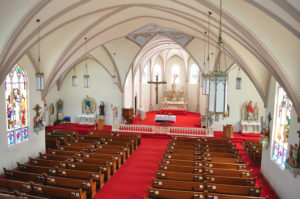 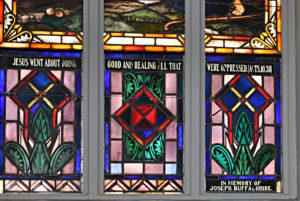 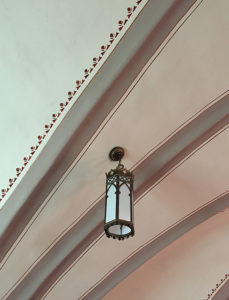 Inside the church, the ceiling is a series of cross-ribbed arches, painted with a pattern that mimics traditional Osage ribbon work.

Ribbon work patterns also appear as details in many of the stained glass windows.

The altar, draped with an Indian blanket, and statues were made by the same craftsmen who supplied them to the famous Loretto Chapel in Santa Fe, New Mexico. 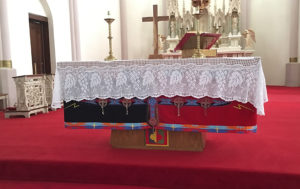 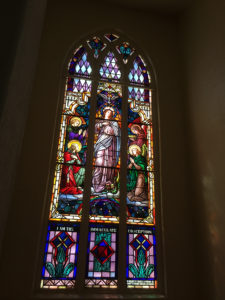 Being created in a country in the midst of  World War I held dangers for such fragile masterpieces however, and for a while the German artisans buried the almost completed windows in a local sandy river bank in Munich to protect them from possible shelling.

The artisans themselves traveled to Oklahoma with the 36 foot tall windows, which were shipped in sections to Pawhuska and placed in the church prior to its completion in 1916.

Each of the windows is a stunning masterpiece, with the brilliant red panes achieved through the addition of gold dust.

The two most unique windows in the cathedral feature the images of Native Americans. 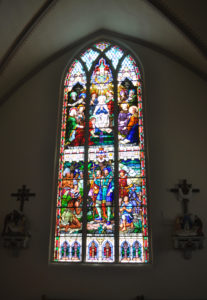 The ‘Columbus Window’ in the south transept depicts the Pentecost scene on the upper panels, and Christopher Columbus’ first encounter with Native Americans in the New World on the lower panels. It was donated by the William S. Mathews family.

Opposite this window, on the north side of the building though, is the exceptional work of art that many travel from around the country (and world) to see in person. 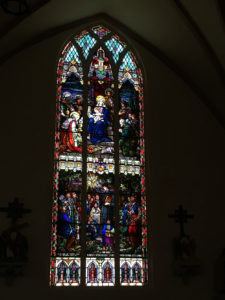 The ‘Osage Window’ portrays the scene of Jsesuit missionary Father John Shoenmakers, known as ‘Black Robe,’  bringing Catholicism to the Osage Nation, at a time when the tribe lived in Kansas before they were moved to Indian Territory. Shoenmakers was held in such high regard by members of the tribe that his name, as Sho-Mink-Ah, is now used as the Osage word for priest.

In addition to the clergyman, the window depicts the images of actual people in traditional Osage dress surrounding the priest, intently listening to the word of God. Many of the tribal members were still alive at the time it was created. They include Osage Chief Bacon Rind, his wife Julia, Chief Saucy Calf, and interpreter Arthur Bonnecastle and his wife. Photographs of those included were sent to Germany along with the order for the windows. This window was donated by Rose Hill, Angie Bonniecastle and T. J. Leahy. 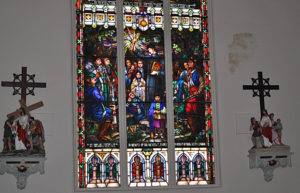 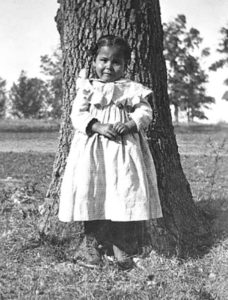 Two adorable little girls stand out from the rest of those pictured, partly due to their stance of staring directly out from the window. They are actual portraits of two young girls who died tragically young from the devastating smallpox disease. They represent the eternal saving power of God’s words to their souls.

Father Shoenmakers worked for 36 years among the Osage until his death in 1883. 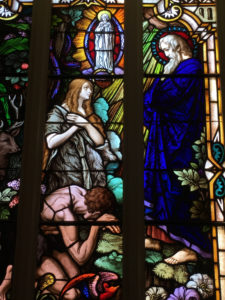 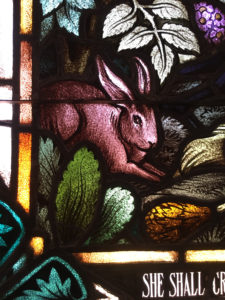 A very small room off the vestibule holds the original baptismal font, as well as a partial view of the ‘Expulsion’ window depicting the banishment of Adam and Eve from the Garden of Eden, and the ‘Revelation of St. John.’

Only the lower half of the Eden window is visible however, until one climbs to the organ loft to view the upper half, where musical instruments appear in the design. 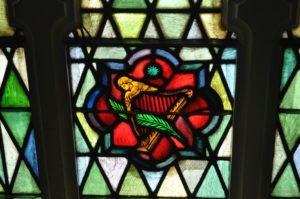 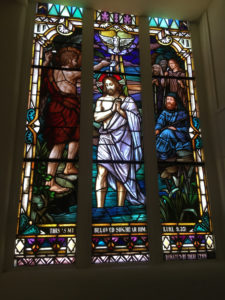 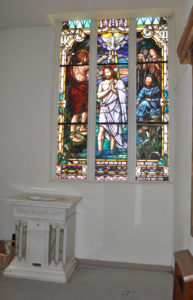 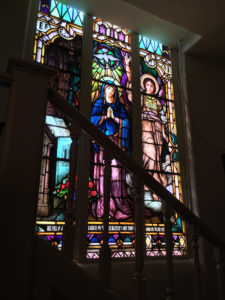 The same can be said of the ‘Annunciation’ window in the vestibule on the opposite side, which is partially obscured by the tightly winding steps to the loft. The roses at the feet of Mary glow impressively in the late afternoon sun.

My sister spotted the name ‘Juanita Scott’ on the donor section of one of the window, which made us smile because…although we knew it wasn’t the same person…it was our grandmother’s name. 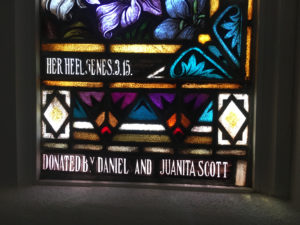 The remaining windows at Immaculate Conception depict traditional Biblical scenes in a highly detailed and theologically symbolic manner, including ‘The Child Jesus Teaching in the Temple,’ ‘Wisdom, Age and Grace,’ ‘The Wedding Feast,’ and other classic biblical portrayals. Each one is beautifully detailed and worthy of study. 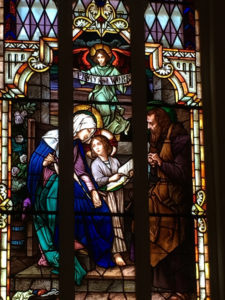 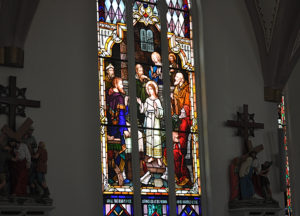 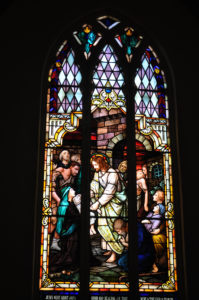 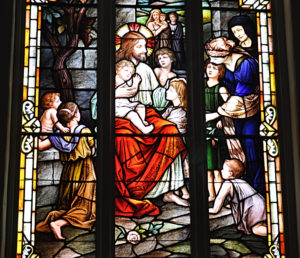 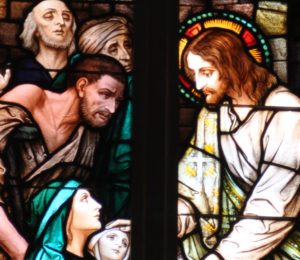 When we asked how many people attended mass there now, the guide responded about 80 to 100 people. For a cathedral of this size, that took us aback. But generations of families have been attending since the church was built, and about 80-90 percent of the parish remains a part of the Osage.

This treasure trove of glass masterworks is definitely worth a detour from any nearby trip route. 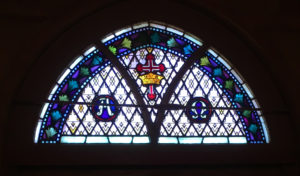