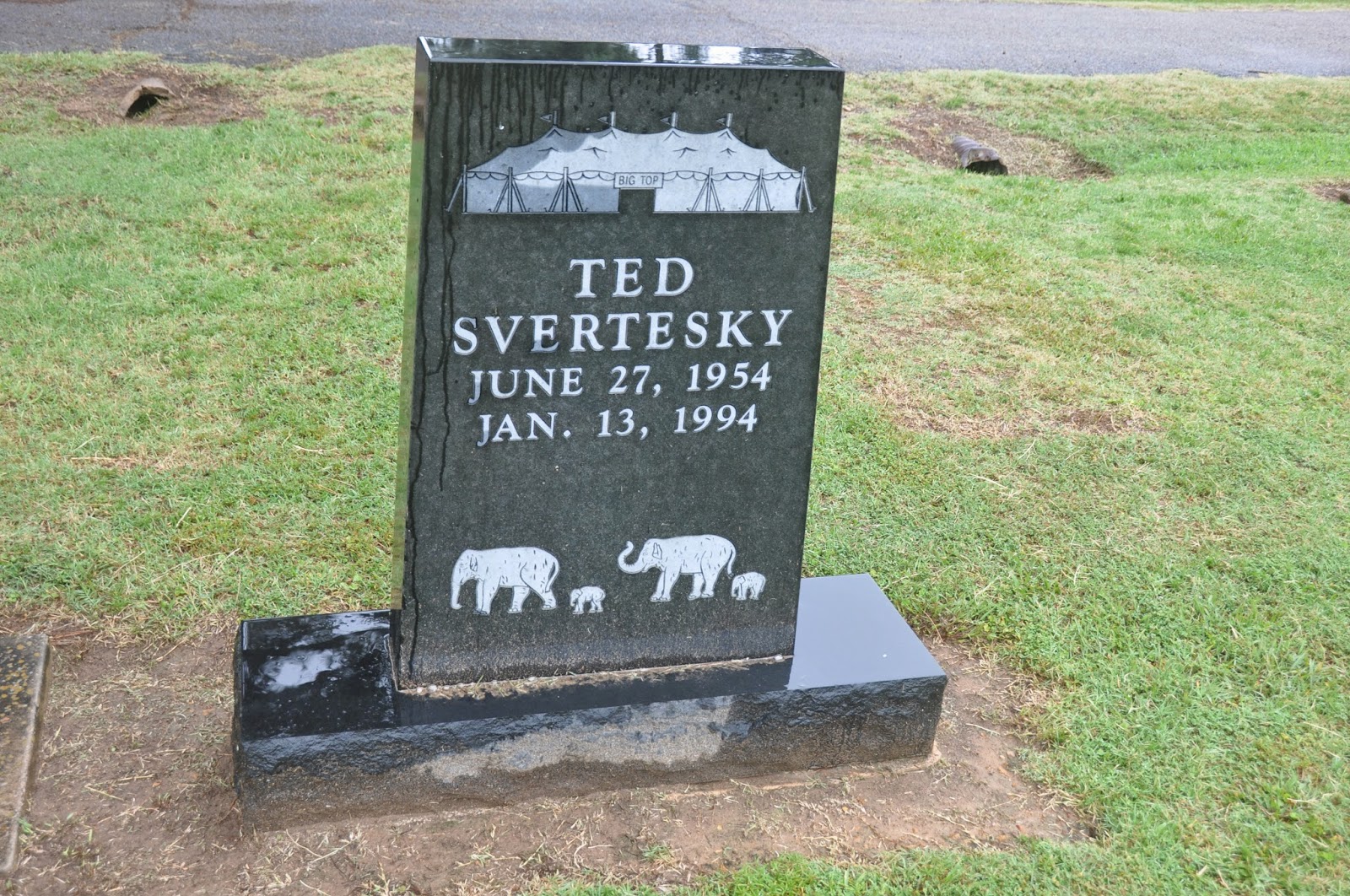 Just after 9:00 in the morning on January 14, 1994, a 53-car Ringling Bros. and Barnum & Bailey circus train headed northbound from St. Petersburg to Orlando for their next show. Rolling along at 38 mph, many of the 150 performers inside were still asleep or just waking up after the previous night’s show when a wheel on one of the passenger cars broke, sending 13 passenger coaches and three flat cars off the tracks. Five of the cars were thrown on their sides.

As the survivors wandered out of the wreckage into the morning fog, they discovered that two of their own had lost their lives in the accident, and fifteen more were injured. 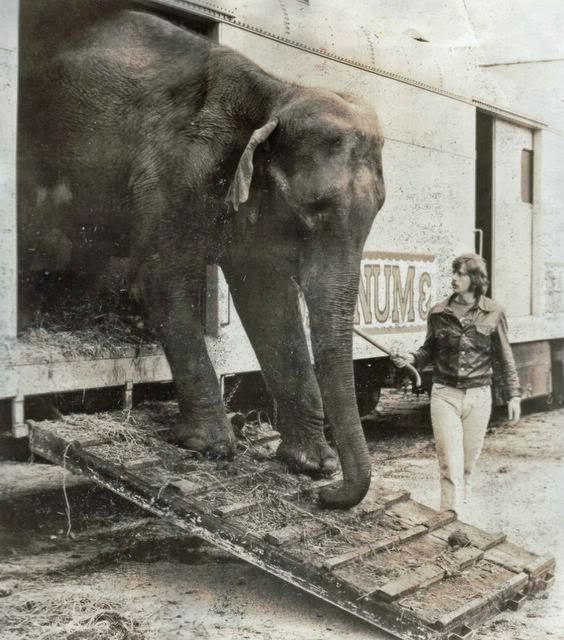 Ringling officials called the train accident their worst in more than 100 years.

Ceslee Conkling, a 28-year-old clown from Fort Worth, Texas, was also killed. She was missing for four hours before her body was found.

None of the 60 circus animals, including lions, tigers and elephants, was hurt. They were traveling in cages at the front and rear of the 53-car train, which broke in the middle.

Ironically, a news helicopter crashed while covering the accident. A photographer received minor injuries, and the pilot was admitted to a hospital with neck and back injuries.

Born in Connecticut, Theodore H. Svertesky was fascinated with the circus and elephants from an early age. As a child he would talk about it, dream about it and build circus models. When he was only 13, Ted ran away from home to join a circus only to be returned the following day by his parents. Four year later at 17 he joined a circus again and this time stayed.

Ted started off doing odd jobs with the elephants, and took every chance to learn about the creatures from the best trainers in the business.

By 1994 Ted headed the Ringling Elephant Farm, a research and breeding facility and oversaw the breeding of Romeo and Juliette, two yearling Asian elephants that were headlining the show. This was Ted’s first road trip with the circus as the presenter of the elephant act in the show.

“It’s kind of a way of life more than a job,” said the 39-year-old trainer from Bridgeport in an interview the week before he died. 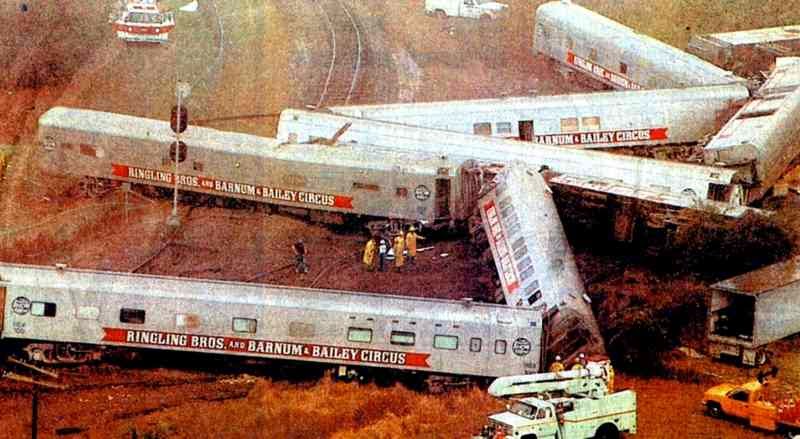 Ted’s wife Patty Zerbini, who helped oversee the 10 elephants – including babies Romeo and Juliette, stayed with the show after the accident. She and her two sons, Anthony and Christopher, travel from town to town in their mobile home. 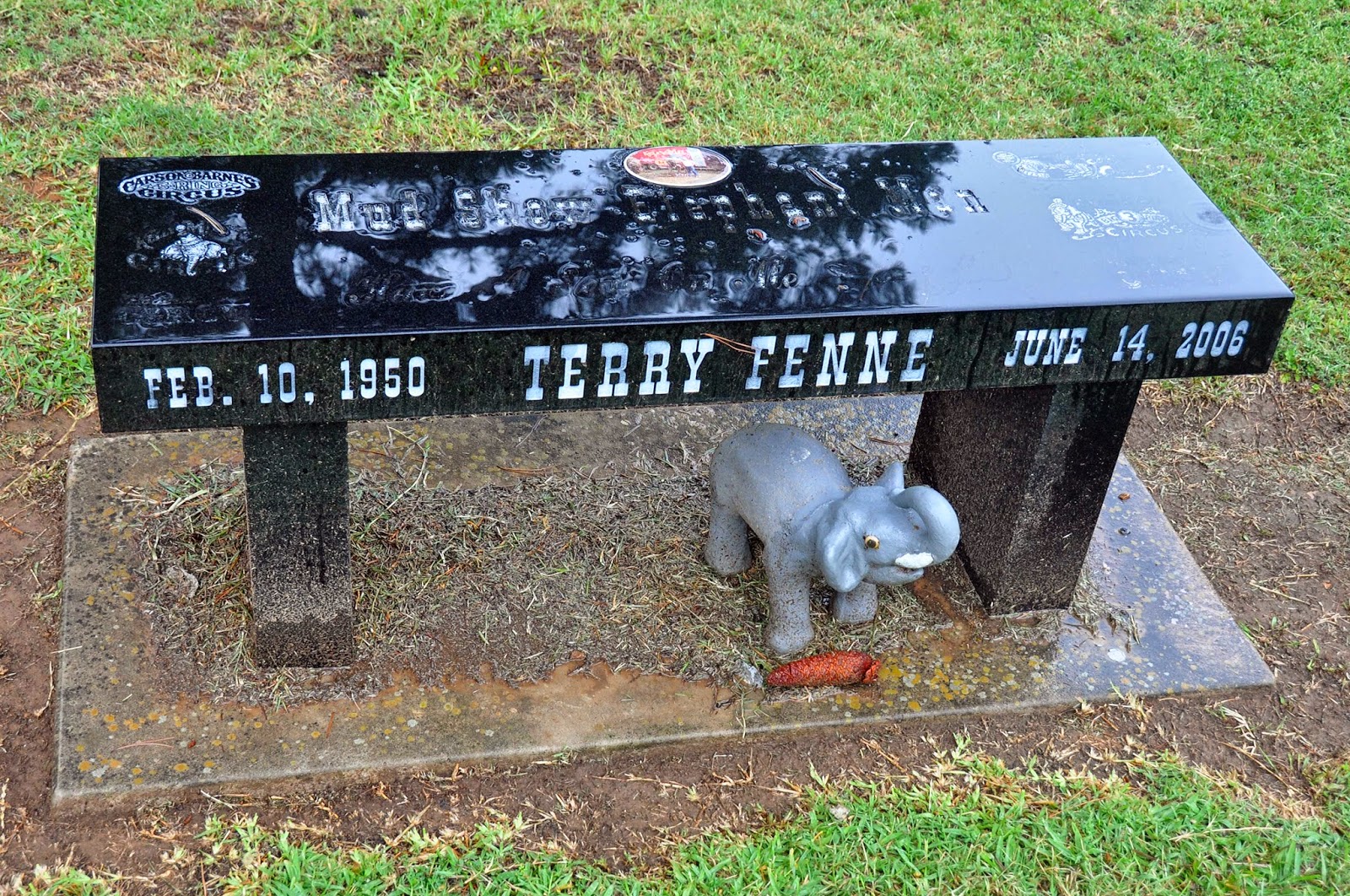 Terry Fenne always told people that if they ever stopped by Showmen’s Rest to “Stop by and have a seat on me.” True to his word, his marker is a beautiful bench, engraved with his signature, photo and the logos of some of the circuses he worked for through the years. 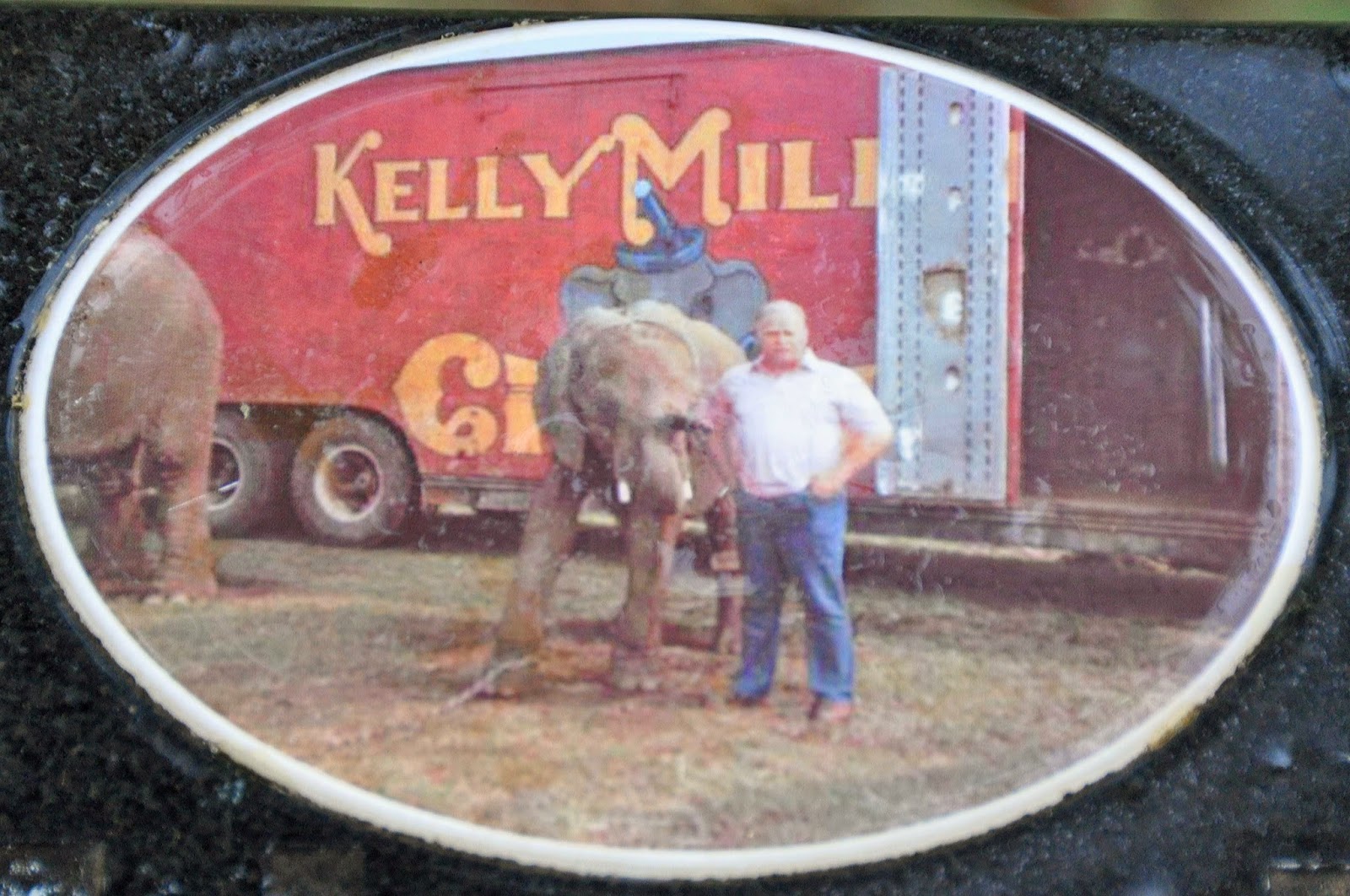 I apologize that, due to the fact that it was raining quite hard when I took these photos the engraving on top of the bench doesn’t appear clear.

Known as the “Mud Show Elephant Man” he trained elephants and drove the elephant truck across the country for many years.

The last few years of his life, he operated an umbrella hot dog pushcart in downtown Paris, Texas, and became a fixture of the town. 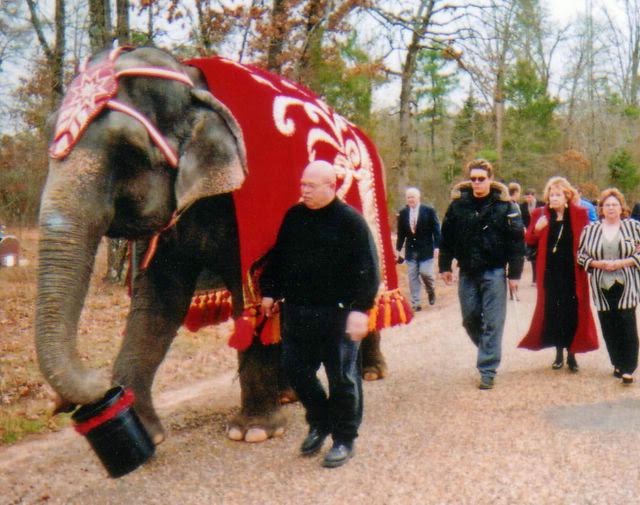 Hamilton grew up in west Texas, the youngest of eight children. He served in the U. S. Air Froce and worked for the Texas Highway Patrol.

Avid circus fan, and a longstanding member of the Circus Fans Association of America. His attendance at the CFA annual conventions led him to Hugo, where he me the Geneneral Manager of Carson & Barnes. He took early retirement at age 54 and joined Carson & Barnes as a booking agent. He became so successful that for the next 20 years he trained other booking agents

He moved over to Kelly Miller, and eventually became Winterquarters Manager. He was know for volunteering his time to help others, especially young circus people. He gave tours of Showmen’s Rest and served on the Circus City Museum and Park Board.

Dudley’s monument features an impressive elephant long mount which was taken from a Carson & Barnes Circus poster with four showgirls. The monument also has a large shade tree which Dudley said he thought would add to the scene and the words
MAY ALL YOUR DAYS BE CIRCUS DAYS
on the front of the gravestone and the logos of Kelly Miller Circus and Carson & Barnes Circus on the back of the monument. 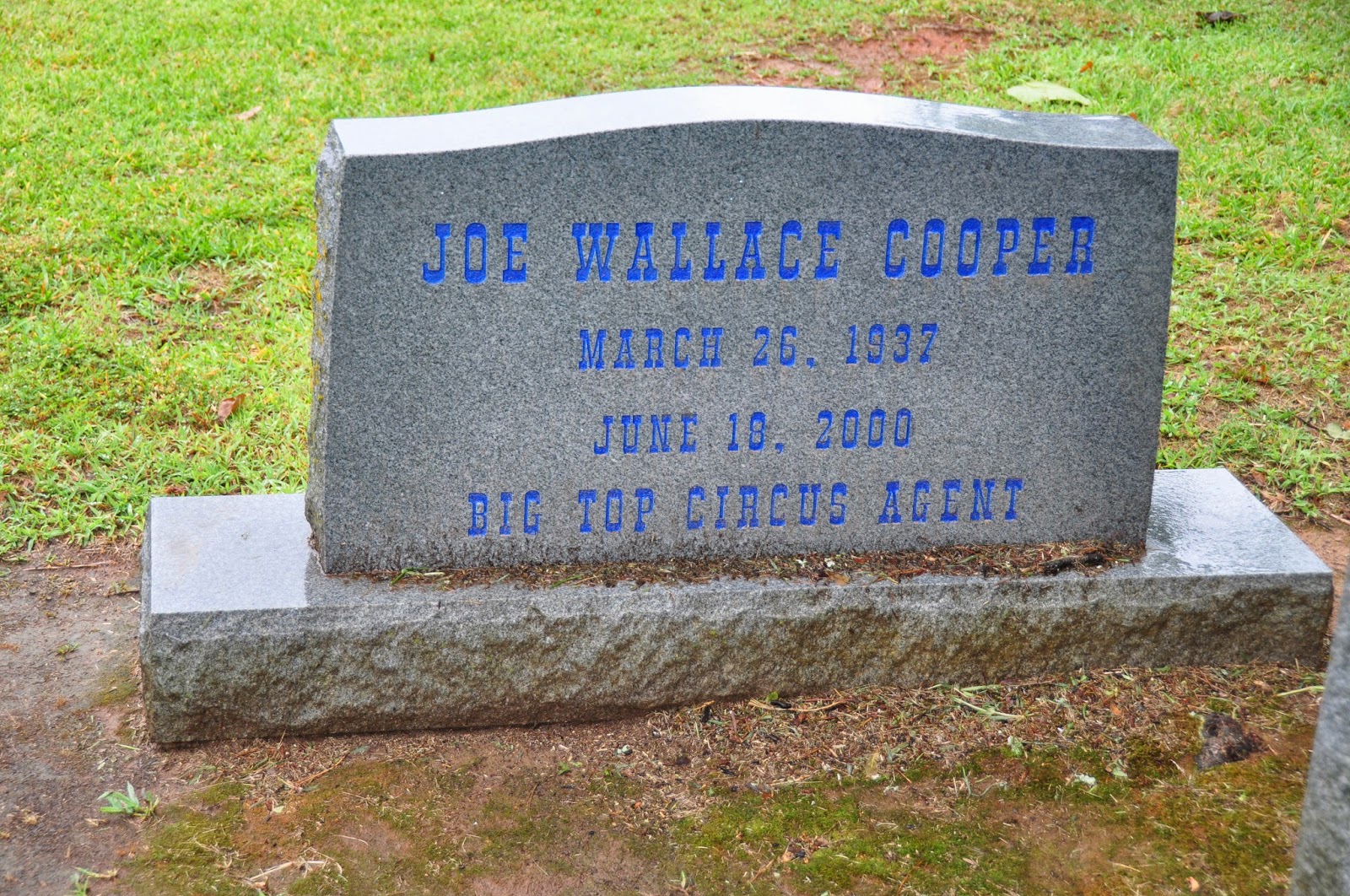 Joe Cooper was a circus agent who worked for Allen Bros. Circus, Culpepper – Merriweather Circus, Carson & Barnes Circus and “was on the road” contracting for the Kelly Miller Circus when he passed away. He was the nephew of circus agent Dudley Hamilton, whose stone is featured above this one. 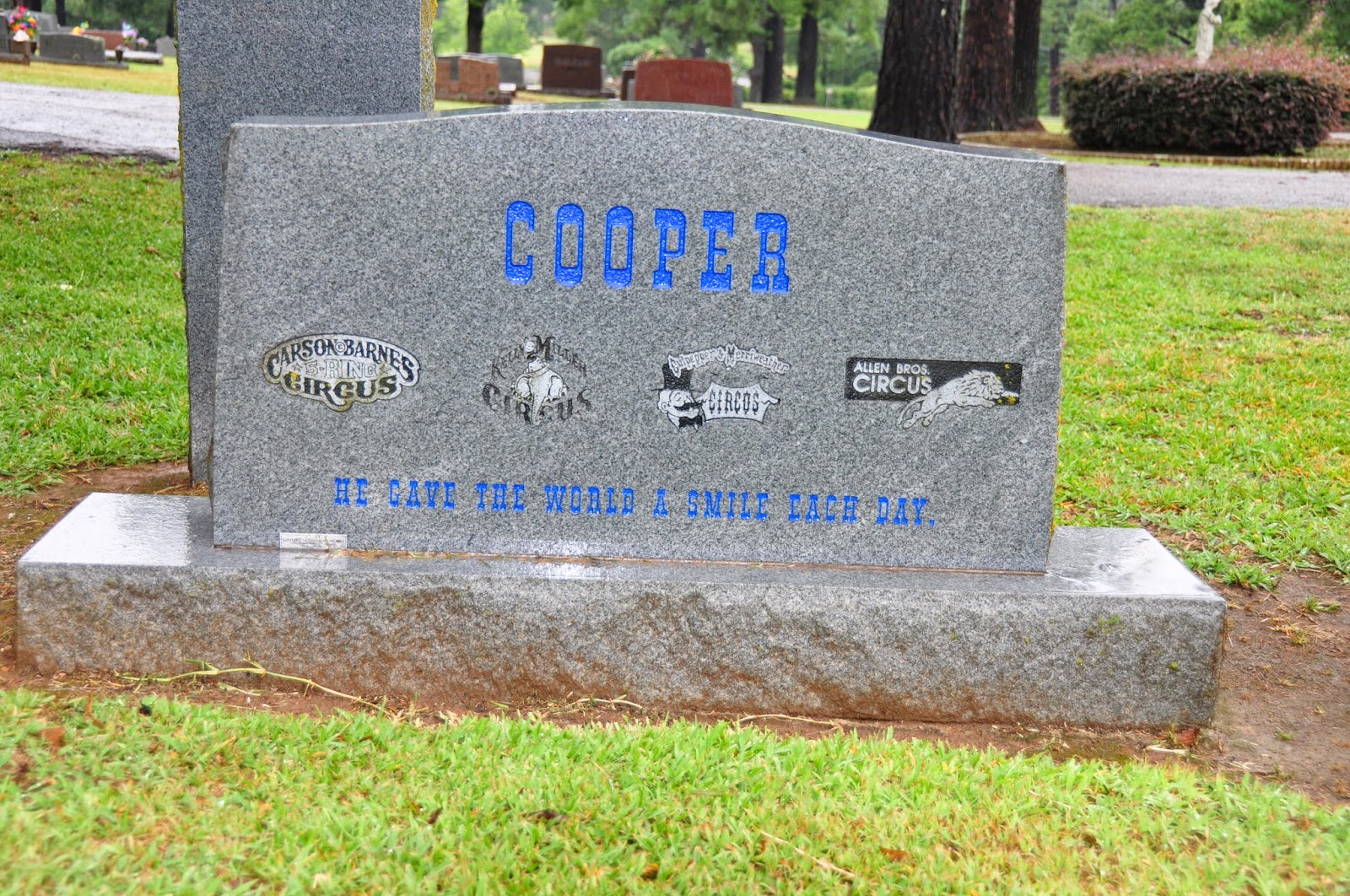 On the front of the monument are the words: “Big Top Circus Agent,” and the sentiment “He gave with world a smile each day is engraved on the base. The back of this colorful stone features the logos of all four circuses with whom he associated.

Next week I’ll wrap up with a few amazing markers from Showmen’s Rest before moving on to share some beautiful stones from one of Texas’ most historic cemeteries. I hope you’ll join me!

One thought on “Circus Train Wreck Victim and Other Circus Folk”