Have you ever search for an outlaw while on a vacation? They can be found in the most unexpected places, and it might not be as dangerous as it sounds.

If you recognize this famous photo, you might just be an Old West enthusiast like I am! It’s Butch Cassidy (bottom right), the Sundance Kid (bottom left) and the Wild Bunch, and is known as the “Fort Worth Five” photo. 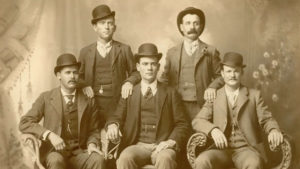 That fellow sitting in the middle – known as “The Tall Texan” – was the subject of my search in Sanderson, Texas. He was a handsome guy, but didn’t always make good choices.

Ben Kilpatrick was born just east of San Angelo in 1874. He worked as a cowboy for several years before he became acquainted with Texas outlaws Sam and Tom Ketchum, and ended up riding with the Ketchum Gang. 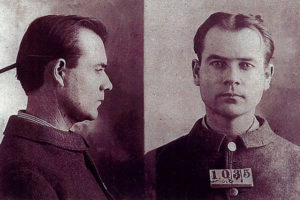 After a failed train robbery that ended in several of the members being caught, Kilpatrick fled to Robber’s Roost in Utah and joined the Wild Bunch. After some success, he and his girlfriend Laura Bullion made their way to St, Louis where they were arrested. Kilpatrick was seated to 15 years in prison for robbery, and Laura was sentence to five. After serving 31/2 years she was released, and went to Tennessee under an assumed name to make a new life.

Kilpatrick, on the other hand, was released after 10 years and went immediately back to a life of crime. Bad decision…

Train number 7 of the Galveston, Harrisburg & San Antonio Railroad pulled out of Del Rio on the evening of March 12, 1912. It made a brief stop for water in Dryden, but as it pulled away from the station Kilpatrick and Ole Hobek ( a friend from his prison days) jumped aboard.

The masked robbers ordered the engineer to go to the first iron bridge east of Baxter’s Curve, about halfway to Sanderson. Once there the bandits ordered the train to stop and the passenger cars and caboose uncoupled from the engine, mail and baggage cars. 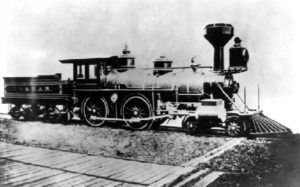 Leaving the passengers behind, they ordered the engine across the bridge and about a mile down the tracks, where the robbers had staged horses for their getaway.

Hobek kept a gun on the engineer while Kilpatrick went back to the baggage car with Wells Fargo Express agent David Trousdale. As they were making their way to the back of the car, Trousdale picked up a mallet from a shipment of frozen oysters and hid it in his clothing. (Frozen oysters…who would have thought THAT would be on the train?!) 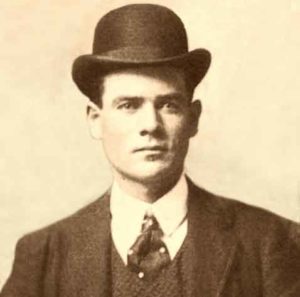 Kilpatrick was so busy filling a bag with $60,000 he didn’t see Trousdale sneak up to hit him over the head with the mallet. (Ouch!) The outlaw was killed with the one blow. Trousdale took the bandit’s gun and returned to the engine where he shot and killed Hobek just after midnight.

With the threat ended, the engineer backed up the train, re-coupled the passenger cars and proceeded to Sanderson.

The dead train robbers were held up for photographs, and later buried in a joint grave at Cedar Grove Cemetery in Sanderson. Trousdale, of course, was rewarded for his bravery. 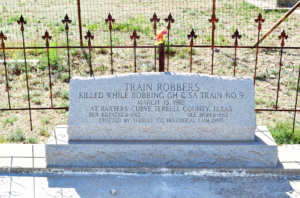 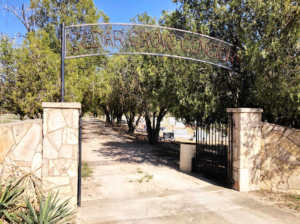 Now known as the Baxter’s Curve Train Robbery (or the Sanderson Train Robbery), it was one of the last train robberies in the state.

In 2019, the mallet used in the incident, a photo of the dead bandits and the Wells Fargo accounts were sold at auction in Arizona for $64,900. It’s a bit ironic how close that amount is to the amount that the robber’s might have gotten away with, had there not been a quick thinking agent on board. 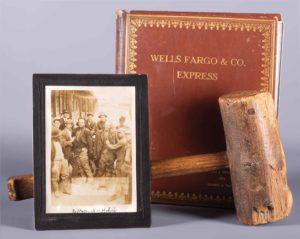 The train robbers’ grave was fairly easy to locate, surrounded by a decorative wrought iron fence and gate. The concrete slab that covers the plot was most likely poured in an effort to prevent gruesome souvenir hunters from robbing the grave.

As a taphophile, or someone who studies cemeteries, I’m always amazed at the stories that lie behind the stones if you only take time to investigate! 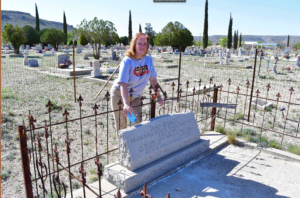 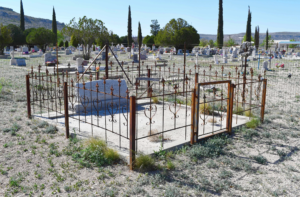 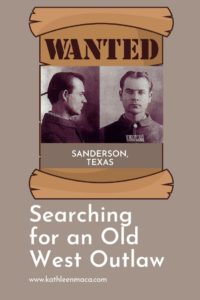 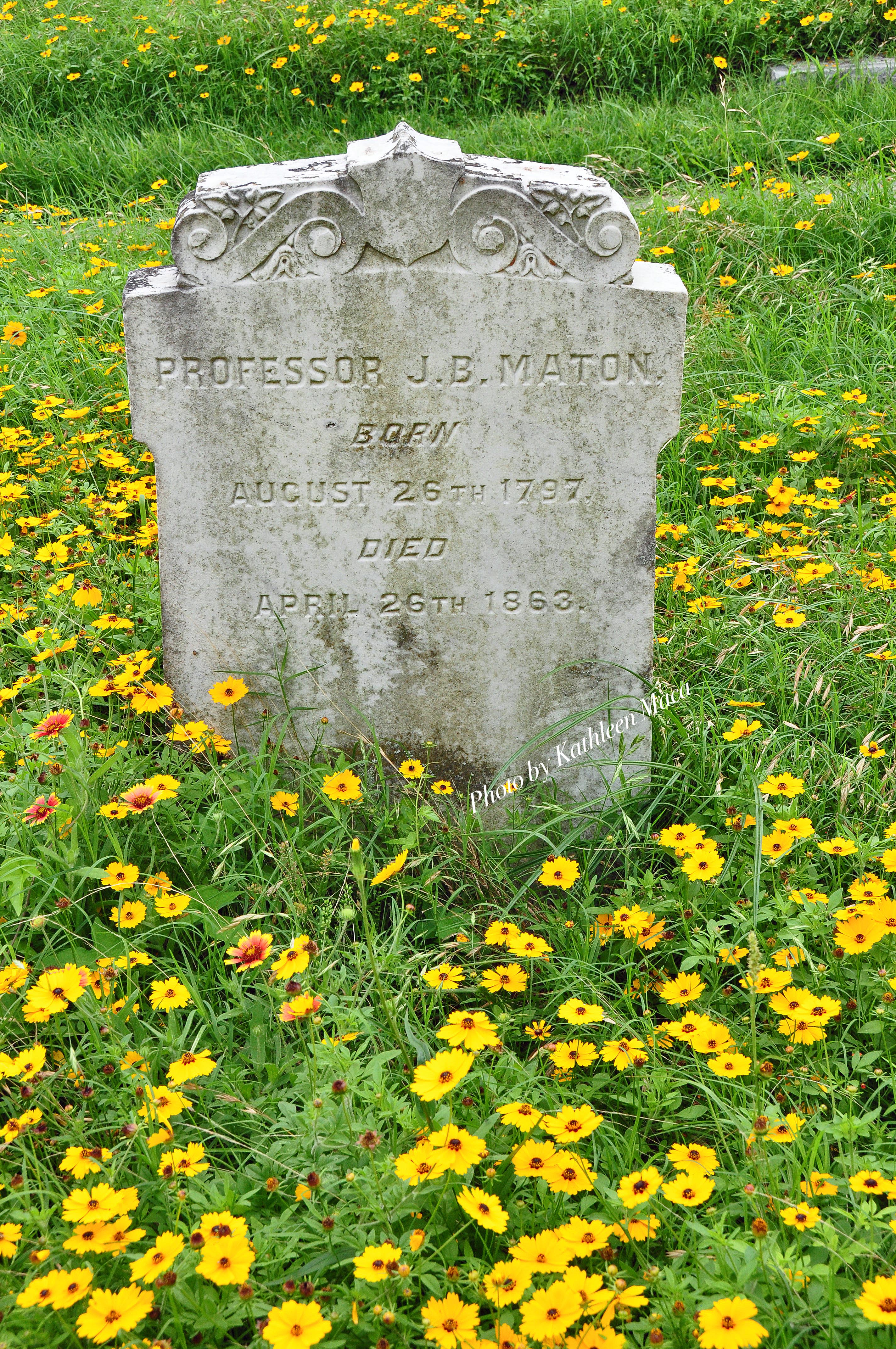 I’ve walked through the seven cemeteries on Broadway in Galveston countless times, photographing, doing research, assisting in restoration, and simply enjoying the history. So I was very surprised this week to find a grave marker that I haven’t taken notice of before. 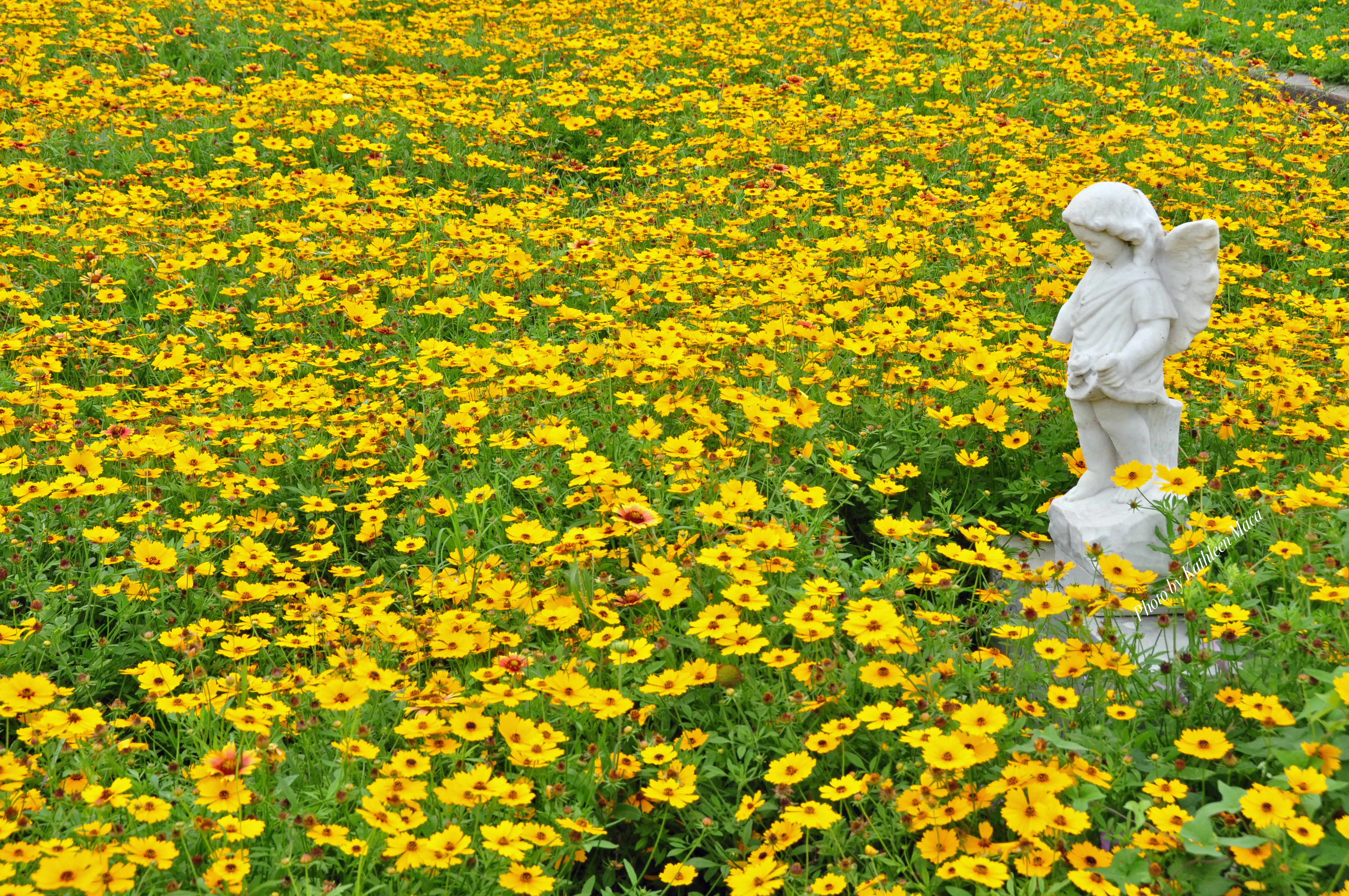 May is my favorite time to take photos there, because the city allows the coreopsis of spring to overtake the cemetery for the month. No one can resist veering off the main avenue to enjoy a closer look 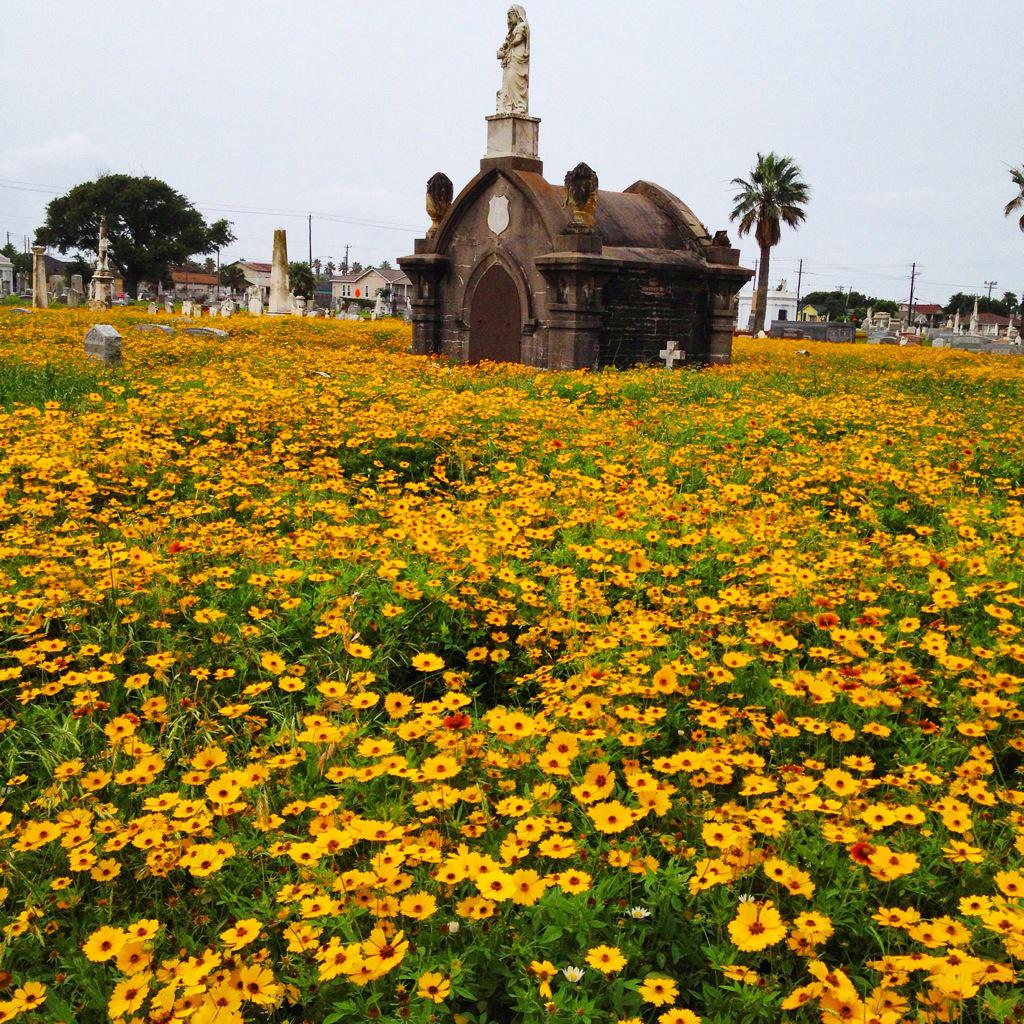 at the exquisite sight.

Wandering down one of the sidewalks to get some close-ups, a stone that was obviously facing the “wrong direction” caught my eye and I walked around the other side to investigate.

Imagine my delight to see “Professor” J. B. Maton as the name, and that he was born in the 18th century. Now, there simply HAD to be a story there! I hadn’t ever heard his name before, but I was determined to investigate once I got home.

The first evidence I have found of John B. Maton living in Galveston was the 1850 Census. In it, he is listed as a 56-year-old schoolteacher who was born in France. Living with him was a 19-year-old male named Martin Maton, who we can presume was his son.

By the fall of 1851, Maton was running advertisements in the local newspapers for his “Male and Female Academy,” stating that he had lived all of his life in the principal cities of France, England and Germany and devoted the last 27 years to teaching. 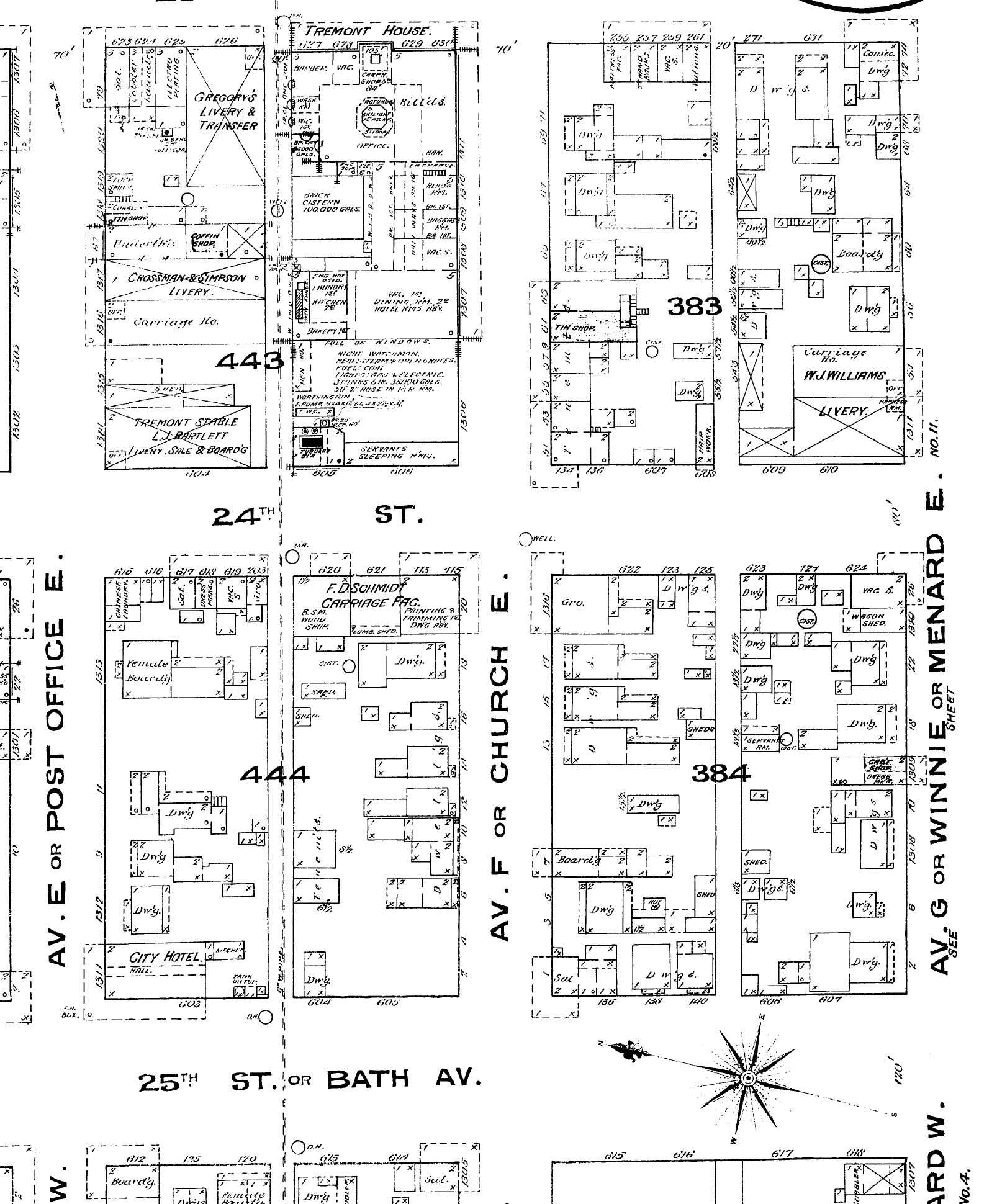 The professor conducted the academy from his house on Twenty-fourth street, one door south of Church Street opposite the Tremont garden. It contained two classrooms “besides every other convenience for an institute as also a large garden with fine shrubbery and a good cistern.”

Mason also taught for a period of four years in Liberty county, between 1852 and 1856.

He signed his name as “Prof. T. Maton” so he presumably went by his middle name, but I could not find any record of what that was.

For two seasons of five months each beginning in September, students could attend the academy for $3 per month ($30 per year) for seniors (older students) or $2 per month ($20 per year) for juniors (younger students), requiring all fees to be prepaid. Compared to today’s private school, this seems like quite a bargain! 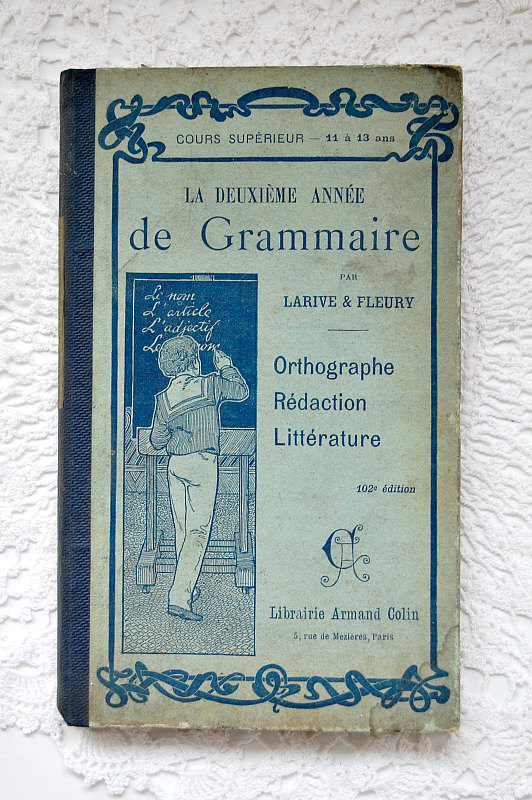 urs were from nine in the morning until four in the afternoon. Subjects included English, French and German languages, history, geography, astronomy, and arithmetic, each taught in “an agreeable style.”

His ads also always emphasized that “particular attention will be paid to impress the pupils with good morals and fine manners.”

“Miss Maton will take charge of the female department.” This could have been Maton’s sister, or daughter. I have not been able to find any mention elsewhere of a female Maton living in the city, much less the household. If anyone has any information about her, I would love to hear about it.

With the advent of war, John Maton enlisted in the Confederate 11th Battalion of Texas Volunteers in Company F with a rank of private. This unit of cavalry and infantry were under the direction of Lt. Colonel Ashley W. Spaight and Major J. S. Irvine.

The professor’s death occurred just one year after enlistment, but I have been unable to find any details. It could just as likely been the result of disease as injury in battle. Either way, his body made it back to Galveston for burial in Trinity Episcopal Cemetery alongside some of the era’s most illustrious citizens.

(NOTE: There was another John Maton from Refugio County, Texas who served in the Civil War, but he survived. Keeping their records distinct from each other takes a bit of care.)

Professor Maton is just one of the stories that hides beneath the stones in historic cemeteries, waiting for someone to take the time to discover and remember them.