A Valentine from Valentine? Yep, it’ll set your card apart from the rest. 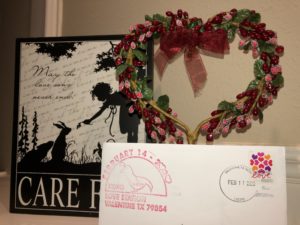 For over 30 years the little post office in Valentine, Texas has postmarked Valentines coming through their station with a little extra love.

Every year, the post office chooses one design from dozens drawn by local schoolchildren to transform into an actual hand-cancel postmark for the holiday. Each year is unique, so even if you make this a tradition it will always seem new.

Requests for the postmark come in from around the world (yes, really!), and it’s obviously the busiest time of year for the remote location. You can walk your Valentines in to the post office, or mail them in, which…unless you happen to be in that area of Texas…is the only way to go.

I have heard about this tradition for years but never tried it myself. There isn’t much updated information available about it on the internet, so when I decided this was the year…I called the regional rep for the United States Post Office. She politely walked me through the process (and no, she had never tried it herself either) and assured me it would actually work.

I live in Houston, so I prepared my cards first, writing them, sealing them in their envelopes, addressing them and attaching a stamp. But here’s where the process is different.

I put all of my Valentines into one larger envelope (remember they were already stamped), and addressed the outside envelope to:

Then I took that large envelope to my local post office and purchased the appropriate postage to get it to Valentine. The postmistress there also expressed an interest, having hear of the program but never having tried it. Are you starting to see a pattern?

The regional representative had told me that all cards must be received in Valentine by February 4 to be in time to get the special post mark. There is no charge to customers requesting this for fewer than 50 Valentines (gracious!). Customers who do have 50 or more will be charged five cents each.

I had 10 Valentines in one large outer envelope that would normally cost a couple of dollars to send, but I sprung for the tracking method (just under $5) since I wanted to “watch” the process.

And off they went! 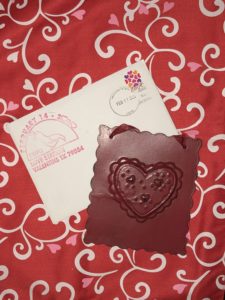 I mailed my envelope on January 23rd and it arrived in Valentine on the 28th. Then the hardest part began…waiting. As time went by I religiously checked my mailbox. I had sent one to my daughter at our address, partially so I would be able to see it for myself. The week of Valentine’s Day came, and I got a bit anxious.

On Valentine’s Day I received a text from a relative in San Antonio thanking me for the card and remarking on the unusual postmark. The good news…it worked. The bad…my daughter’s still hadn’t arrived at our house. But it finally DID arrive, the day after Valentine’s. Soooo, we’re just dragging out the holiday a bit longer.

I’ll definitely try this again next year, but send them out even a bit earlier to see if that makes a difference.

It’s a great way to make your Valentines uniquely Texan! 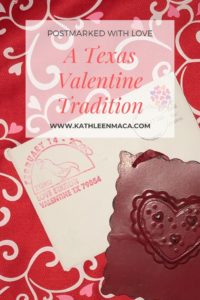 If you’re looking for something to satisfy a sweet tooth, head to Corsicana! 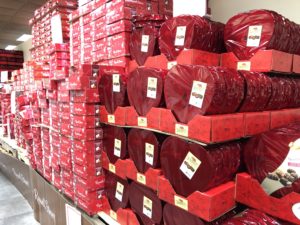 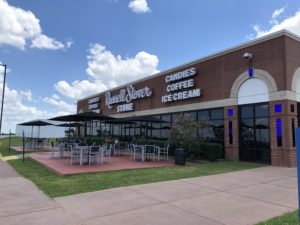 to the ceiling. . . literally . . . with a candy assortment to satisfy any sweet tooth. You can purchase the chocolates by the box, by the bag or individually. Don’t forget to try their ice cream. It’ll make you glad you turned off the highway, and is a great treat to break up a road trip. There’s even a shaded patio area where you can pull up a chair and enjoy it without risking drips inside the car. 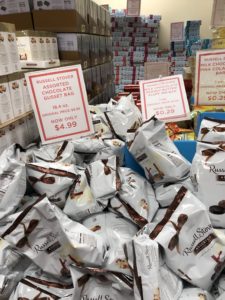 most people by surprise on their first visit is the overstock bargains. Leave your willpower behind as you head to the back of the store, it won’t do you any good! Regardless of the time of year you visit, you’ll find overstocks candy from Easter, Christmas, Halloween, Valentine’s Day and other seasons all at drastically reduced prices. And don’t worry, even if they’re out of season, they taste fresh and yummy! 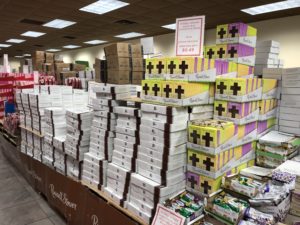 Be sure to get a “frequent shopper card. Even if you only swing by about once per year, there’s often a free surprise for card holders. 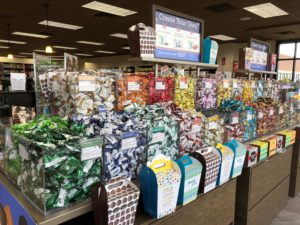 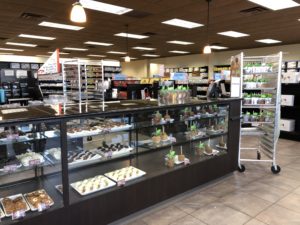 And, oooooh, the freshly made caramel apples!

What’s your favorite type of chocolate? 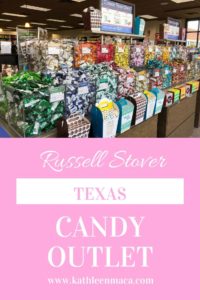 Not many would imagine that the legacy of unrequited love would result in the oldest continuously operating library and the first city library in Texas…but it actually did. So it’s only appropriate that we stop in for a visit just in time for Valentine’s Day. 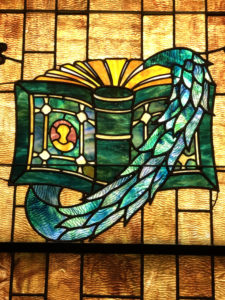 The Dr. Eugene Clark Library in Lockhart was built in 1899, and dedicated on July 6, 1900. It’s the oldest library continually operated in the same building in the state of Texas. (There are other libraries in the state who claim the “oldest” title with other criteria, of course.)

The beautiful two-story red brick Classical Revival dome-topped, original building was designed in an in 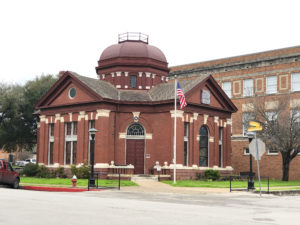 genious Greek cross plan with a corner entrance. It was built by local contractor T. S. Hodges, who was also known for his work on other projects such as the Tyler County Courthouse, Luling’s Walker Brothers Building, Lockhart’s First Christian Church and the castle-like Caldwell County Jail. 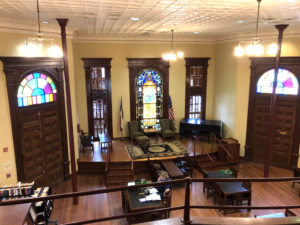 The pressed-tin ceiling, woodwork, lighting fixtures and perimeter shelving you’ll see on your visit here are all original. The eastern arm is accented with a stained-glass window above a stage. 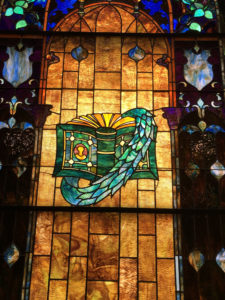 Until 1956 when the seats were removed, the building also served as an auditorium. Local productions and traveling shows performed in the room now filled book shelves and reading tables. President William Howard Taft gave a speech from the stage, which still exists beneath the striking window.

When actress Dorothy Sarnoff performed there, she told the audience, “If you’re bored with my performance tonight, you can just reach over and grab a good book to read.”

To the rear of the main room are two iron, spiral staircases that lead to a narrow upstairs gallery. Though this area is not open to the public, I was given access so that I could share these photos with my readers. Now mind you, it was a bit unnerving since the unstable brass railing barely reached the height of my knees…but those are the lengths I’ll go to in order to experience history! 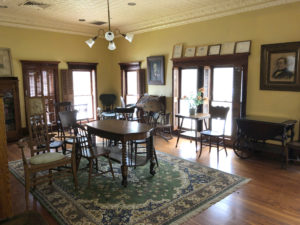 The room behind this gallery is the home of the second oldest chapter of the Texas Federation of Women’s Clubs. The organization b 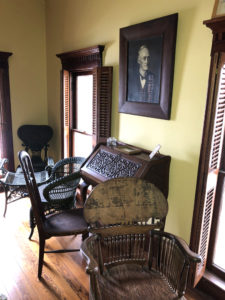 egan as a lyceum club, which was a club for women interested in the arts, professions, science, contemporary issues and lifelong learning. The space still has many of the original furnishings, including Dr. Clark’s collection of medical books and a photograph of him.

It’s this room dedicated specifically for use by women that leads us back to our love story and why Dr. Eugene Clark founded the library that bears his name.

Clark was born in New Orleans, but was orphaned by the age of six – his father dying on a Civil War battlefield, and his mother passing away three years later. He was raised by friends of his parents, eventually attending Tulane Medical School.

Upon his graduation in 1883 he moved to Lockhart to practice medicine with the local physician, Dr. Lancaster. The elder doctor soon left his practice though, leaving the 21-year-old Clark to handle the practice alone which he did for 13 years.

During those years he met a young lady named Mamie Steele, 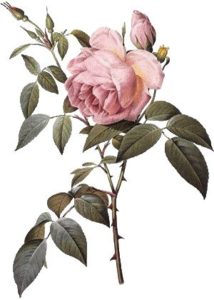 a member of the local lyceum club, and fell in love with her. Unfortunately Mamie’s heart belonged to another man.

The heartbroken doctor went to Vienna, Austria in 1896 to study the specialities of ear, nose and throat, and chose San Antonio as his new home when he returned.

Dr. Clark became seriously ill soon afterward and stopped in Lockhart to visit friends on his way to New York to have surgery. While he was on the east coast it was determined that his condition was terminal, so he returned to his native New Orleans to spend his remaining days. During that time he dictated his will, leaving $10,000 to build a library for Lockhart. He specified that it should always include a meeting room for the local women’s lyceum.

He died in 1898, leaving a last token of his affection in honor of his feelings for Mamie. One wonders what Mamie’s reaction was to the tribute, as she still lived in Lockhart with her husband John Jarratt at the time. 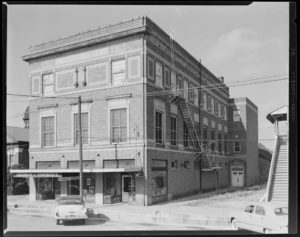 The story of the library is even more interesting since it expanded in 1996 to include the 1850 Masonic Temple next door. The refurbished temple houses a second-floor technology room providing internet access and educational courses. 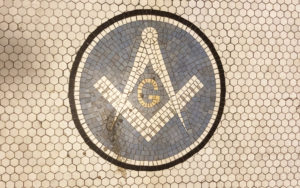 The only visible clues that it was once a Masonic Temple are a tile inlay on the ground floor, and an unadorned stage on the third.

You can visit the Dr. Eugene Clark library  at 217 South Main Street in Lockhart. 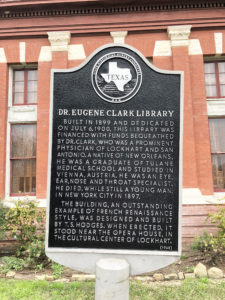 Today’s icy weather is definitely not the norm for this part of Texas. Our streets, tires and infrastructure is designed to handle heavy rains and heat, but not snow.

But because it’s such a rare occurrence, photos of snowfalls from the past seem especially enchanting. On Valentine’s Day in 1895 Galveston was blanketed with over a foot of snow, bringing street car traffic to a halt, and closing the doors of banks and wholesale businesses.

The snow began to fall about one o’clock in the afternoon, and continued to fall for the rest of the day.

Shoes stores sold out of “gum boots” (rubber boots) and overshoes, as even the most sedate citizens took part in citywide snowball fights. Merchants, policemen, bankers carriage drivers, doctors an other adults took the opportunity to launch snowballs at each other, to the delight of onlookers.

Those trapped at the train station waiting for trains that had no way of reaching them were less amused.  The bright spot at the station occurred when Officer Perrett saved a yellow dog he found half-frozen in a snow drift, and warmed it by the waiting room stove.

A few ingenious locals attached temporary runners on their carriages and used them as makeshift sleighs. Others were the victims of icy falls and other mishaps.

As evening fell Dr. Isaac Cline, the now famous Galveston meteorologist was busily answering telephone inquiries about the prospect of more snow, but were met with the news that the “worst” was over. Our generation isn’t the first to be excited over the prospect of snow or worry about it’s implications…and it certainly won’t be the last. 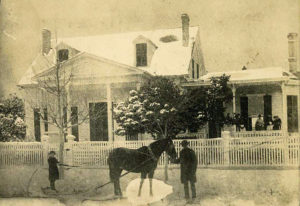