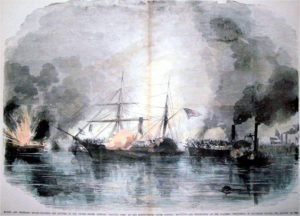 A small, unassuming grave marker stands in the Trinity Episcopal Cemetery of Galveston, located at Forty-First Street and Broadway. Tough simple in design, it marks a New Year’s Day that encompassed the tragedy of the War Between the States; the day a Confederate officer embraced a dying Union officer, his own son.

When West Point graduate and military veteran Colonel Albert M. Lea moved to Texas in 1857 his son Edward remained in Maryland to attend the United States Naval Academy and continue the celebrated military tradition of the family; the same family that would be devastated by fighting each other within the very country they loved.

As a Texan and friend of General Sam Houston, Albert Lea applied for a Confederate commission in March 1861, just one month before the Civil War began. He wrote a letter to his then 26-year-old son advising him to follow his conscience when he made the decision regarding which side of the conflict to support, but added an ominous warning: “If you decide to fight for the Old Flag,” he said, “It is not likely that we will meet again, except face to face on the battlefield.”

Edward chose loyalty to the Union, telling his fellow officers he did not desire his family’s love if it involved being a traitor to his country.

After months of serving in a variety of locations, Colonel Lea was transferred back to Texas on December 15, 1862, staying with his wife and family at a relative’s home in Corsicana.

Once in the area, Lea learned that the Union vessel Harriet Lane on which he believed his son was serving, had been occupying the harbor of Galveston since the Union captured and occupied the island earlier in October. Lea hurried to Houston to long-time friend General Magruder’s headquarters, where he learned that a plan to recapture Galveston Island would be executed within a week.

During the pre-dawn hours of January 1, 1863, Lea helped to move six brass cannons of Captain M. McMahon’s battery across Galveston Island’s rail causeway. Afterward, Colonel Forshey posted Colonel Lea in one of the town’s tallest buildings near Broadway (some reports suggest a church, others Ashton villa) to observe and report the status of the attack.

A severe battle ensued, during which the Westfield, which had run aground off Pelican Spit, was blown up, and the Confederate gunboat Bayou City rammed the Harriet Lane near the wheelhouse, which allowed the Confederate troops to overrun the vessel. The remainder of the Union fleet fled to New Orleans, leaving three companies of the 42nd Massachusetts infantry on Kuhn’s Wharf to surrender. The rebels had retaken the city at a cost that was yet to be seen.

Colonel Lea rushed to Kuhn’s Wharf waterfront near where the battle had taken place. Once granted permission to board the Harriet Lane, he learned that her Union commander, Captain Wainwright, was dead and Lieutenant Commander Edward Lea, the executive officer, had been shot through the stomach.

Making his way through the soldiers pillaging the ship, Lea found his son lying in the cockpit, surrounded by dead and dying comrades.

Dr. Penrose, who was operating on a wounded man, handed Colonel Lea a flask of brandy for his son to sip, telling the grief-stricken father that the wound was mortal.

Cradling the young officer’s head, Colonel Lea said, “Edward, this is your father.”

“Yes father, I know you,” the young man whispered in return, “but I cannot move.”

In a desperate attempt to change fate, the Colonel went ashore to arrange for his son to be moved to the Sisters of Charity Hospital. After relating the events to General Magruder, whom he met along the way, Magruder offered his private quarters for his friend’s son.

While his father was absent, the lieutenant was told that his death was near and was asked if he had any last wishes. With his last breath, Edward replied, “No, my father is here.”

When Albert Lea returned, his brave son was dead. The next day an elaborate funeral procession that included Confederate and Union officers, sympathetic local citizens, a drum corps of prisoners from the battle and a group of Masons in full regalia solemnly carried

Lieutenant Lea and Captain Wainwright from Magruder’s headquarters to a service at the Episcopal Church. Colonel Albert Lea himself delivered the eulogy before the two men were buried with full military honors in a common grave, donated by local business leader W. Grover.

The fair city of Galveston had witnessed the true horror of Civil War violence on a personal level.

In 1866, the body of Captain Wainwright was reinterred with honors at the Naval Cemetery in Annapolis, Maryland.

A wealthy relative offered to rebury Edward Lea’s remains beside those of his mother in Green Mount Cemetery in Baltimore, but

Albert Lea refused. He said he felt it was more fitting for his son to rest where he fell “in sight of the sea and in sound of the surf.”

Albert Lea remained in Corsicana, where he experienced several reversals of fortune in the cotton trade. On the morning of January 16, 1891, Lea died of heart failure sitting alone in his bedroom. He is buried in Oakwood Cemetery in Corsicana.

Ironically, the Harriet Lane itself sustained little damage in the battle, and it visited Galveston as a cargo ship under the name Eliot Ritchie for years to come. 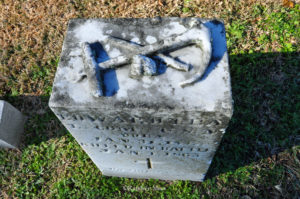 Of all who fought and died on the Harriet Lane’s decks only Lieutenant Lea remains in Galveston. A weathered sculpture of an anchor and binoculars lay on top of a stone that poignantly echoes his last words, “My father is here.” 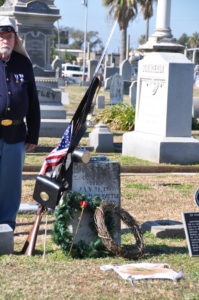 To see photos from the 2018 re-enactment of the Lea-Wainwright funeral in Galveston, visit:

2 thoughts on “The Poignant Tragedy of the Battle of Galveston”